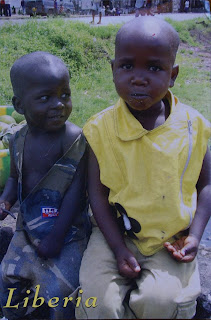 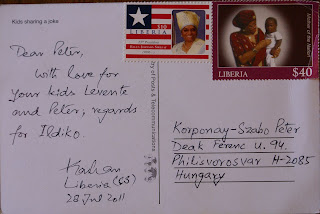 Country #150!!! And all this within a few months! Well, I have to admit that I hadn't really expected as many postcards in that very short time. But here it is: all the way from Monrovia, the capital city of Liberia, the postcard finally arrived from the 150th country!
The capital was named after the US president James Monroe, because he was probably the most prominent supporter of the colonization of Liberia.
In the postcard you can see two cute Liberian kids "sharing a joke" as it reads in the back. Well, I'm not sure whether these kids actually knew that they'd be one of the emblems of the country let alone they'd be shown in a Hungarian postcard collector's blog to the whole world...
Anyway, there are nice stamps on the back showing the present president, Ellen Johnson Sirleaf, the "Mother of the Nation".
Bejegyezte: KSzP dátum: 8/21/2011