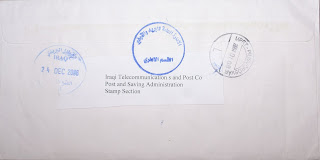 The letter above is a document of postal history, indeed. Iraq is now almost an impossible country to get a letter from because there are places where there is no postal service whatsoever. Yet, what makes this letter even more unique is that it was posted on 24th and 25th December (so basically at Christmas) in Baghdad, Iraq and the letter arrived in Hungary on 8th January 2007. Why is it interesting? Because the stamp shows Saddam Hussein and when the letter was posted he was alive, but by the time I got it he had already been dead... (he was hanged on 30th December 2006). Jealous, aren't you?
Bejegyezte: KSzP dátum: 7/31/2011